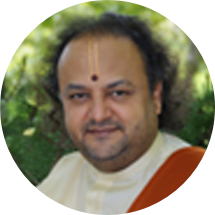 Akhil Bhaktiyoga Foundation is an international religious organization based on the philosophy of Bhaktiyoga. What is Bhaktiyoga? According to Srimad Bhagwat geeta, when Arjun asks lord Krishna:

Which means that between those who are eternally absorbed in your veneration (Bhakti) and those who worship the ascetic and amorphous aspect of ‘Brahma’, who could be considered more competent and supreme or who amongst the two is dearer to you? On hearing this Lord Krishna tells Arjun that although people practice many different customs and sacraments to achieve my benediction but Bhaktiyoga is the most desirable and humane practice which brings the being closer to me. For those who devote themselves to me and my service are the ones most superlative in this world.

Akhil Bhaktiyoga foundation is an approach towards the fulfilment of the age old lacunae in the history of the entire mankind – the pursuit of blissfulness. There can be no other way of achieving such blissfulness other than the only stable philosophy of Bhaktiyoga. Bhaktiyoga is not an external investigation but an internal exploration. Bhakti Yoga is the highest stage of spiritualism. True bhakti or devotion flourishes only after one achieves wisdom. Bhaktiyoga, in the true sense, means saturation of the mind with the devotion and love for God, surrendering everything else to the lotus feet of God and dissolution of one’s ‘aham’ (ego, i.e. existence as a specific individual). Unlike mundane love, bhakti is not instinctive blind emotionalism or outburst of passion.